Merchant reaction, from those we’ve spoken with, to the WorldPay fee increases on Visa debit seems to be one of “outrage” as their costs have increased by significantly more than the interchange increases.  It seems the first of the fee increase letters went out yesterday and heres an interesting case study on one merchant we spoke with. 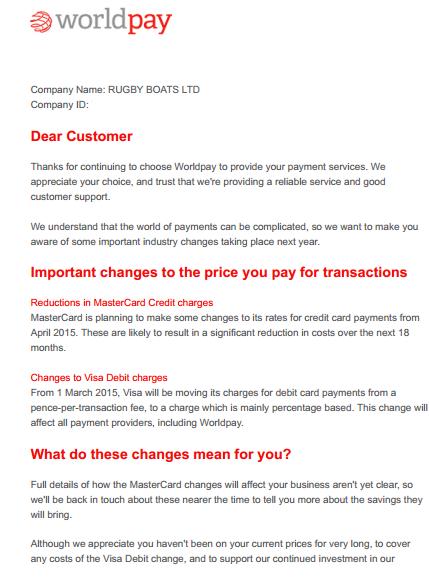 Rugby Boats is a small business based in Northampton which sells new and used barges (www.rugbyboats.co.uk).  Their owner Dominic Miles told us that they only recently joined WorldPay via the FSB offer having previously been with Retail Merchant Services.

They received their fee increase letter from WorldPay yesterday which kicks off by telling them how “complicated” the world of payments is and then immediately notifies of future reductions in the Mastercard credit card charges, which are yet unknown as to size, timing and to what extent WorldPay will pass onto its customers.

They currently pay 12p for debit transactions, which is roughly the current market rate, and have an average transaction value (“ATV”) of c.£160. As you can see from their letter, their debit rate has increased to 0.37% of transaction value.

If WorldPay passed on only their interchange cost 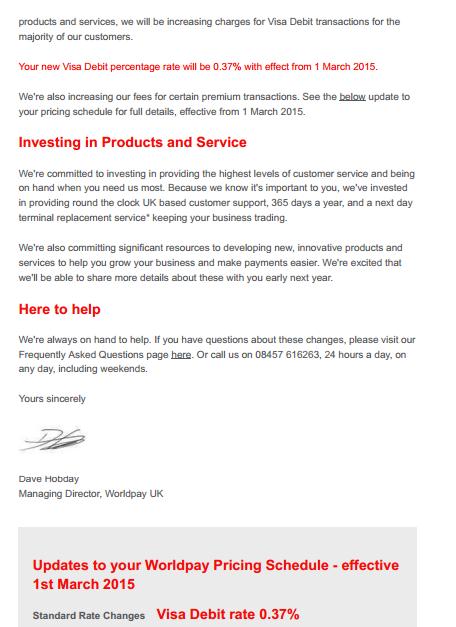 increases from Visa then the new debit cost for a £160 transaction should equal 37p which is calculated as :

The actual new cost will be 59p, giving WorldPay an additional profit contribution of 22p per debit transaction!  Their previous profit from Rugby Boat’s debit transactions was 4p, and now it is 26p, a massive 550% increase.

But it gets worse 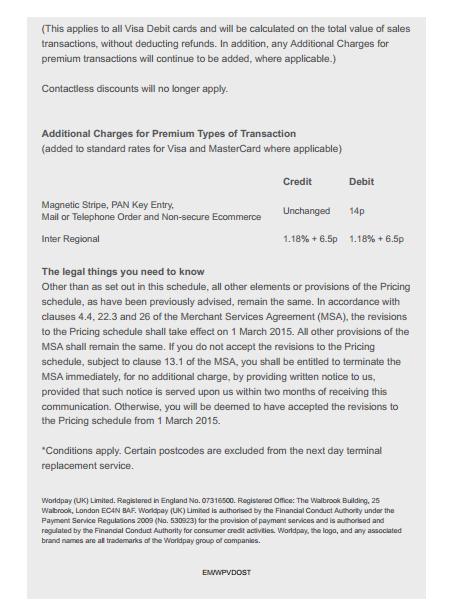 we’re willing to bet the large corporates like Tesco’s will have some form of cap on their debit rates.

Theres also another fee increase on the final page of the letter.  Debit transactions taken over the phone (“CNP”) and using CVV2 security used to incur additional interchange of 2.5p (vs. chip and pin).  Visa have now increased that differential to 10p per transaction and WorldPay have added an additional 4p of profit contribution taking the differential up to 14p.  if you only do the occasional CNP transaction then maybe not too much of an impact but spare a thought for any sizeable mail order business!  This change alone almost doubles their debit costs, even before you consider the impact of the 0.2% charge for secure transactions.

So, actually 3 debit price increases wrapped up into the one letter and in each instance WorldPay has included a material profit element in addition to their own cost increases :

We would still love to hear your experiences and you can upload your letter here as Dominic did, and we can publish in full or annonymously :