Judging by the calls we receive asking for advice, terminal hire agreements are one of the most contentious issues for merchants.

If you’re about to sign a terminal hire agreement, stop right now! Before you sign anything, we’ve got 5 super helpful tips on what to look out for.

If you’ve already signed one, pull your agreement out of the drawer, blow off the dust and make sure you understand everything we’re about to talk about. Understanding your agreement could save you a serious wad of cash further down the line.

This is basic and it pains me to write this, but it’s amazing how many people rely on the word of the salesperson and sign agreements without actually reading them.

But it takes less than ten minutes to read! There’s no excuse for not taking ten minutes out of your day to read through a contract that’ll be with you for years.

We often hear people saying that their salesperson had promised them X percentage on credit card transactions or Y percent on CNP transactions. Well, salespeople often lie. Unless it’s written down in your contract in black and white, do not believe anything your salesperson says.

And if you don’t read the agreement upfront, don’t complain when things don’t turn out the way the salesperson told you.

Almost all hire agreements feature a minimum term, during which you pay a penalty to terminate. Almost all merchants hate this as it means you’re stuck with a deal several years down the line even if it turns out to be uncompetitive.

Think of it this way. The terminal provider has invested a capital cost in your terminal and if they don’t receive the full rental payments over the minimum term then they are out of pocket.

Yes, the provider could recover some of the costs by re-renting the terminal but merchants generally don’t like used terminals so the rental will be lower. And that’s not even mentioning the delivery, recovery and reconfiguration costs.

So, it’s really not that unreasonable for the terminal provider to want to recover his costs and earn some sort of profit from the initial lease. The important thing is that you know what your minimum term actually is.

Read your contract carefully and ensure the stated minimum term matches up with what you were quoted.

Following on from our minimum term tip, it’s time to introduce early termination fees. This fee kicks in if you decide to cancel your contract with within the minimum term.

Exactly how much your early termination fee is will depend on your provider but here are some common figures.

If you are a sole trader or a partnership, you may want to rely on the Consumer Credit Act 1974. However, it is essential that you check if it applies to your hire agreement.

The Consumer Credit Act 1974 permits (in most cases) a cancellation of your terminal agreement after 18 months without paying any further rental payments.

Some suppliers seek to avoid the protections offered to merchants by the Consumer Credit Act 1974 by structuring their terminal rental agreement as a membership rather than a hire agreement. This means you aren’t covered and may still have to make additional payments if you cancel after 18 months.

Cardsave (now part of Worldpay) was infamous for this ploy. Check your agreement and ask your supplier directly if you are in doubt.

Once your minimum term is over, shouldn’t you be entitled to terminate with minimal notice at no penalty? It definitely sounds reasonable! You have enjoyed a good service and the terminal provider has recovered their capital outlay and earned a nice margin. With most providers, if you wish to change suppliers, you are able to give reasonable notice (usually between one and three months) and part ways amicably.

However, there are some providers who structure their Notice of Termination differently and lock you into longer notice periods.

This is one of the things I find most objectionable in the industry and wish suppliers would stop doing. It means merchants are forced to stay when they don’t want to and sours the relationship between the two parties.

Although there’s a lot of ways suppliers can artificially extend the notice period, there are two common tactics.

Sadly, this behaviour is becoming increasingly prevalent in the industry.

(Handepay also rents their terminals from a sister company called Merchant Rentals so be sure to submit your termination notice to the correct company or Handepay will argue they haven’t been notified in accordance with your agreement!)

Locked into an Agreement? 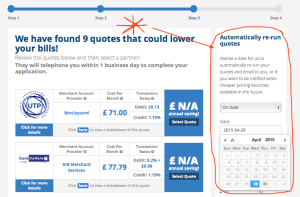 If you are unfortunate enough to be locked into an agreement, all is not lost.

Often you find it can still be worthwhile to cancel an agreement early, incur a termination fee and move to a cheaper supplier. If you decide on this option, do your sums carefully. As a rule of thumb, if your monthly savings are higher than your monthly terminal hire costs, switching suppliers is likely to be worthwhile

On Cardswitcher you can now automatically schedule new quotes for a date in the future to coincide with your notice period ending.

When you get your quotes, simply click on the section at the top right (as shown) and set the date. We will automatically generate new quotes and email you a summary. This can also serve as a handy reminder as to when you need to submit your Notice of Termination to your current provider.