Have you ever watched for someone pay with something using their smartphone? Maybe you’ve even done so yourself? Well, have you ever wondered how it all works?

Smartphone payments use a technology called Near Field Communication (NFC) and it’s just one of the latest trends associated with mobile payments.

In this article, we’ll look at what NFC is, the benefits NFC payments offer business owners (and their customers), the practicalities of accepting NFC payments and finally the difference between NFC and EMV. Let’s get started.

Near Field Communication (NFC) is a communication protocol that uses magnetic field induction to enable communication between devices when they are brought within a few centimetres of each other (within 4cm or 1.6 inches to be precise).

Technically, NFC is a subset of a technology called RFID (radio-frequency identification), which uses radio waves for short-distance communication. 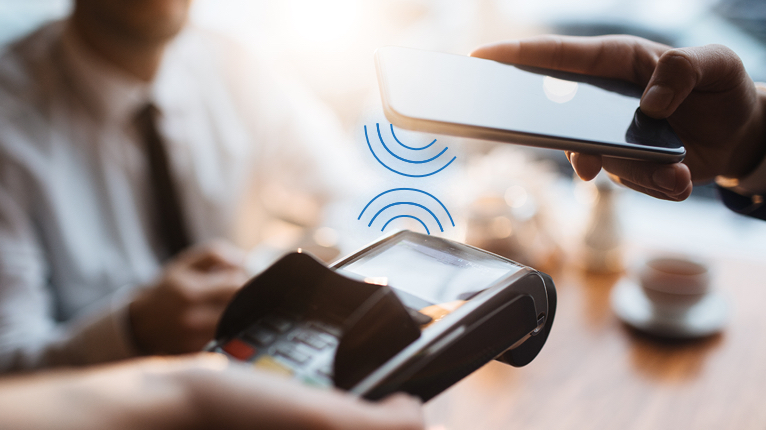 RFID has been used for decades in supermarket scanning, cattle tagging, baggage handling and building access but its NFC variant is relatively new.

NFC was jointly developed by Philips and Sony in the early-2000s but took a while until it cemented its place as a universally-accepted standard behind contactless payments.

How does NFC work?

As I explained earlier, NFC has something to do with radio signals and magnetic fields. If you’re more technically-minded, here is a more in-depth look at the NFC process.

Loop antennas employ electromagnetic induction when they are brought close together. This allows the antennas to exchange information using a specific radio frequency band — 13.56MHz on ISO/IEC 18,000-3 air interface, to be precise.

What are the benefits of NFC?

As a merchant, it can feel exhausting to hear about all the new payment methods coming out. However, I strongly recommend you pay attention to NFC and mobile payments as they can offer a tonne of benefits to your business.

In the sections below, we’ll look at two benefits in particular: security and speed.

When phone manufacturers first introduced mobile payments, the idea of “touch and go” contactless payments felt incredibly non-secure to a lot of people. However, this couldn’t be further from the truth. In reality, NFC mobile payments are actually one of the most secure ways to pay.

Think about a traditional credit card. Almost all of the data—the debit or credit card number, the cardholder’s name and the CVV number—is right there on the card in a static form. The only thing missing is the PIN but that’s just four-digit number and it isn’t even required for card-not-present (CNP) or online transactions.

Once a criminal has hold of your card, they have a lot of the information they need to perpetrate a series of fraudulent transactions.

With NFC payments, all of the data is encrypted and dynamic (constantly changing) using tokenisation. When you set up a mobile phone for contactless payments, you upload your credit card or debit card and the details are then sent to your card’s issuing bank. The bank replaces your card details with a series of randomly generated numbers (the token) and that’s what is stored on your phone. So none of your actual card details are stored on your phone or given to merchants. Even if a fraudster steals your token, it’s worthless if used out-with your phone.

Furthermore, each time you initiate an NFC payment, these tokens change. This makes it virtually impossible to isolate and extract the card details encrypted in a token.

But that’s not the end of the story. Most modern smartphones have an additional layer of biometric security for payment authentication. Think Touch ID on iPhones and iris scanners on Samsung devices.

Before you can use phone payment services like Apple Pay and Google Pay, you need to unlock your phone using a biometric security feature.

One of the big media fears surrounding contactless cards when they were first introduced was that criminals with RFID-equipped readers could “skim” your card taking payments without your knowledge. The resulting hysteria created a boom in RFID-blocking wallets despite the impracticality of skimming.

Remember that scammers would need to hold their scanner within 4cm of your wallet or purse. Even if they managed to get close enough to you, the maximum they could get is £30.

NFC technology reduces this almost non-existent threat even further. If a scammer holds a scanner to your phone, nothing will happen as you still have to unlock the service using your fingerprint or other biometric verification.

Another key benefit of NFC payments is the speed of payment. It takes a customer far less time to pull out their phone and touch it to the card terminal than it does for them to extract their card, insert it into the card terminal and type in their PIN.

The global payment processor Wirecard estimates that NFC can be up to 50% quicker than conventional Chip & PIN card payments, which is extremely valuable for merchants who struggle with long queues at their checkouts.

Using NFC-enabled mobile payments is very simple. Once your card has been uploaded you your phone, you’re good to go.

When you want to make a payment, simply unlock your phone and hold it up to the merchant’s card reader or card terminal. If you have multiple cards loaded, you’ll have to select the correct one.

Paying with NFC also means that the floor limit for contactless card payments (currently £30 in the UK) doesn’t apply because biometric authentication (fingerprint or iris) is required.

As an interesting aside, Samsung Pay can actually work on non-contactless card terminals as long as they have a magnetic stripe reader. Samsung Pay does this by using the MST technology we discussed earlier.

NFC and EMV are two payment acronyms which are often confused by customers and merchants. Both represent encrypted payment technologies but are very different.

During this article, we’ve spoken at length about NFC—a radio wave communication format for mobile phone payments—but what is EMV?

EMV is a Chip & PIN technology first developed by Europay, Mastercard and Visa, although the technology is now managed by a consortium of financial companies, including the original trio, American Express, Union Pay, JCB and Discover.

EMV simply refers to a smart-card that stores data on an integrated circuit in addition to the magnetic stripe. This offers improved security against fraud and the ability to use a PIN and cryptographic algorithms for authentication rather than just a signature as was the case prior to EMV.

EMV now feels antiquated now in comparison to NFC and biometric authentication but it was an important step in the evolution of payments security.